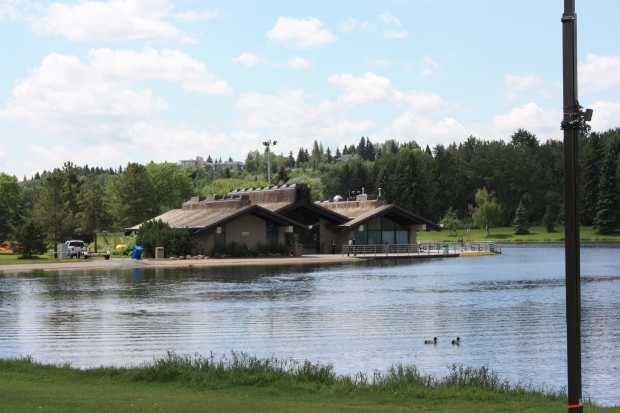 This is a shot from one of the nicest parks we have in Edmonton, and we really have some nice parks.  If anyone has purchased my poetry book, “Poems From Inside Me” They will see on the front cover a gull spreading it’s wings as it flies over this small body of water.  Today is a little windy, a little cold and very wet and slushy, almost like a Spring day, but normally we are around minus 20 celsius at this time of year.  I could have posted a picture of Hawaii, but I figured it would warm my heart a bit more to see a place here when it is nice.  I think in many ways Edmonton’s summer is nicer than Hawaii, mostly because it doesn’t get as hot, it isn’t as muggy when it is hot and there are much more daylight hours than tropical locations because Edmonton is so far North.

I wanted to shake things up a bit today with the blog because I have been hard at work on a few things and just haven’t got the energy to compose a fresh poem.  I think I will post a ‘used’ poem on the page, as always I welcome feedback.  What I have been up to is setting up a crowdfunding web page with the hopes of raising $750.00 (already $50 has been generously donated) which I will use to hire an illustrator for a comic book script I have written, and hopefully this will help cover printing costs as well. I have a couple of rare opportunities, one is that I have gotten a part-time job where I will be going to schools and other classroom settings and talking about my life experiences with mental illness, and though I have two books on the subject, I don’t know if they will help teens much, partly because not all teens are into regular books, and not all teens can afford regular books.  So my idea is to print up and distribute this comic in these settings, and by some million to one shot, I was sent an email asking for proposals for presentations at a conference in California on mental health and comic books.  Can you believe it?  There really has to be some kind of major intelligent guiding force in this Universe.  Anyhow, anyone interested can check out my crowdfunding page at: http://www.gofundme.com/oneinfive1in5

I think what I am going to do is to post a video from Youtube I made below here, it is a narration of me walking through the mental hospital I was sent to as an 18 year-old and last left some 13 years ago at the age of 29.  Pardon if the first little while is boring, I decided to keep it because as I went towards the hospital on the bus a young woman started a conversation with me that seemed relevant.  Look for todays (used) poem below the video.  Actually, what the heck, I will put in three short poems, I had entered them in a contest to appear on the bus but they weren’t accepted.

The Truth of The Matter

The gentle blackbird asking nothing of anyone

A shiny object with which to line his nest, a little food

A thin shock of dark hair, a lust for life

A sincere smile, a shirt indicating his military unit

The blackbird is known all around the neighborhood

The young man seems the type to have many friends

I weep for my blackbird friend and this nameless young soldier

Both of them have been alone and in pain

Both of them must face life with just one leg

More Than a Scavenger

Someone once told me birds aren’t very smart

And yet I will never tire of marveling at their beauty

Even the simple gulls can soar and glide

Press their perfectly arrayed wings against the air

With just the right energy to carry themselves skyward

Once, in a place where many are old and forgotten

I felt generous and threw a pizza crust to a gull

Over to a puddle and soaked it until it was softer

I once saw a deer in my city

Than any made-up model

At the sound of an unkind foe

And somehow for a moment

I could see her soul; her sad tired soul

Longing for rest and peacefulness

In a city full of meat eaters

Find my books at Audrey's