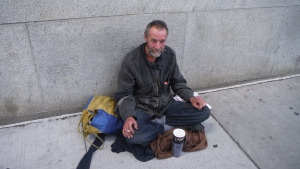 Good day dear readers.  Well, it is my last full day in Toronto.  Yesterday I went around taking pictures and these three men were kind enough to let me take their picture.  I wanted people to see the real face of homelessness.  I don’t know what brought these men out on the streets like this but there are a thousand valid reasons.  For starters they either have no family or are estranged from their family.  This is something that touches me heart because my family is so important to me.  I like to focus on my niece a lot but I also have a sister and a Dad and a few cousins and an Aunt and Uncle that I really like having in my life.  I guess the easiest way for me to think about these men is to put myself in their shoes.  I can recall being in California and not being able to work (due to no work permit) and not wanting to get in trouble with the Law in case I ever wanted to go back there (which I eventually did when I went to Hawaii).  The first day I was in California the guy I traveled with took off on me and I spent the night sleeping in a ditch.  This was not the first time or the last I had to resort to outside sleeping and it isn’t very pleasant.  I knew a guy who once slept under a bridge and his whole day was about getting enough booze so that he could drink himself to sleep.  He was mentally ill and this cycle of booze and not sleeping is so easy to get caught up in.  Before I was able to hitch rides out of California there were times when I had literally gone 5 days without food or sleep.  It was so bad that if I sat down somewhere I would sleep almost instantly and have extremely vivid and frightening dreams.  I was able to get back to Canada, to get the sleep I needed to get myself functioning again and then I was able to find work but if I hadn’t gotten out of there I don’t know where I would be right now.

One of the sad things about homelessness is that it seems that no matter how well (and things are NOT going well with the economy right now) the economy may be going, there will be people who are poor.  I think this means it is quite obvious that these people are unable to work, and I feel strongly that anyone in that situation should be given benefits enough to have a place to live and means to get food to eat.  I will never forget the words of a Danish friend when he had seen Vancouver, he said the place was very depressing, that it was like there was almost no social welfare.  I see a lot of news about Denmark, how they make 140% of their power needs through wind, how their people are among the happiest.  At one time I could have become a Danish citizen but I have a deep love for this country I live in.  I am very pleased now to see that Alberta for the very first time in its history has a Socialist Government.  There won’t be a lot of drastic changes, I am actually finding that often even Conservatives in Canada are more Socialist than many would think.  They do some things to provide universal health care and one of the best disability programs in the country.  Like Denmark, Alberta is able to afford these things by virtue of having oil in their jurisdiction.  I think one of the ways a person can judge how well the government helps the homeless is how many of them one sees, and in Toronto there is a lot of them.  They sleep right on sidewalk corners, they have sleeping bags and ‘campsites’ staked out under bridges.  I really wish I knew the best thing to do for them.  I often try to give a little change, and people say that if you give them change they will spend their money on booze or drugs but I think a lot about that.  You are almost required to tip waiters and waitresses, but you don’t tell them how they have to spend their money.  I also watched a video recently of a gifted native piano player who had been homeless for a very long time until he got into a supportive housing situation where they would allow him to drink a couple of drinks every few hours just to keep his nerves calm and allow him to function.  I challenge you, dear readers to think of what you can do to help even just one homeless person.  Can you give them an old sleeping bag now that winter is coming?  Can you buy coffee shop gift cards to give for Christmas?  It’s up to you.  I hope you will stick around to read today’s poem, it is another one about a homeless person and I hope you will enjoy it.

I can only dream of the life you live
And it does help a little when you give
But in truth I long for someone just like you
To help me, take me in, let me start anew

I know I could have a life if I just got clean
You have no idea what a chance like that would mean
But sadly none of you could trust me in that way
So if you please, a few coins to get me through the day?