Hello Dear readers. just thought I would encourage anyone who hasn’t had the chance to check out my sister site, Dear Ava (click here) for great Mother’s Day gifts and a wonderful blog.

I have some exciting news, I am near to getting approval to start to distribute two of my other books for free as eBooks here on this site. Please stay tuned and click the Tower Bridge photo———> at right to download my latest book, “Alert and Oriented x3: A Snapshot of a Severe Psychosis” —————————>

I wanted to share a great review I received about this book from the CEO of the Schizophrenia Society of Canada, so here goes:

Leif Gregersen provides up-close, first hand insight into the world of schizophrenia. Known as potentially the most devastating mental illness accompanied by horrible societal stigma, misunderstandings, misconceptions, and especially mis-characterizations of those living with and recovering from schizophrenia, Mr. Gregersen humanizes this illness by his own lived experience. Most importantly, we see a person, not just a diagnosis. We see his identity as he tells his story. His identity is not rooted in symptoms and pathology but in purpose, meaning, and how he wishes to help others to become more compassionately present with those with mental health challenges and their family members and friends.   This whole process or journey is now called, “recovery.” Recovery is living beyond the limitation of a mental illness with meaning, purpose, a sense of identity and resiliency, social inclusion. Mr. Gregersen lives a life of recovery. 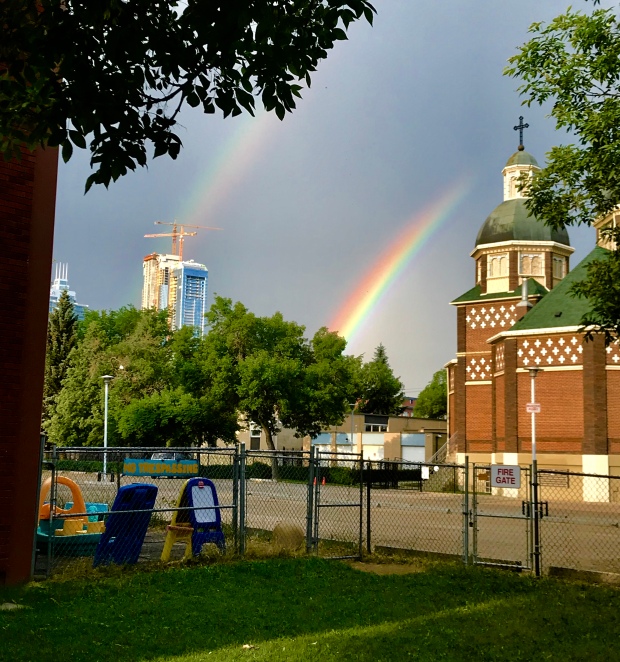 So what is a church really? There are so many loose definitions. I was talking to my cousin on this topic a short time ago and really we started to get down to what the Buddhists believe, that the place of worship is a place of refuge. I admitted to him that my place of refuge, before I started going to church on my own was a library, specifically the library in St.Albert. One day shortly after I stopped collecting comics I started watching a wonderful series done by Levar Burton (Geordie Laforge from Star Trek: The Next Generation) called Reading Rainbow. He used to talk about all kinds of reading, and even how picture books can have a value. Since I loved reading and comic books were no longer cool, I started at the children’s section of our city library and looked for things that sparked my interest. One of the first books was one about the FBI. It had a lot of pictures and some easy to read text, but the funny thing is I learned so much about the FBI (former the Treasury Department) that I have a working knowledge of the agency to this day. After that, I worked my way upstairs to the adult sections and I think I started out with history books. I was fascinated with World War Two and I was a cadet at the time, so a large knowledge of combat and weapons came in pretty handy when friends and I got into discussions about our mutual passion. I went on to pore through photography books, books of old old cartoon strips, comedy books, and even managed to sneak a book about nude photography past the librarian. For years when I had the time I would head to the library and read as many magazines as I could. When I lived in North Vancouver on the coast, I was so much of a regular at the magazine stand the Librarians knew what I liked to read and got to know me. Then of course there were the novels I devoured, especially if they had a historical or military theme. It was almost a natural progression for me to become a writer. What the best part of it was, was that after being released from the psychiatric hospital and being low income and not having too many friends, writing was the perfect thing for me. I didn’t have to have qualifications or degrees, I just had to be able to put pen to paper and all my reading experience served me well. When I told my cousin this and asked him what his refuge was, he said it was his stereo. He has worked in some of the top music stores in the country, he is an accomplished band and studio musician, and to him music was his refuge. I encourage anyone with stress in their lives that either have a mental illness or not to find something to take refuge in. For a lot of people it can be a musical instrument, especially a piano. I used to carry around a harmonica even though I wasn’t very accomplished at it, I liked making sound and trying to play songs and find rhythms. For a while I also tried to play guitar, and even with my horribly limited knowledge of it, when I sit down with a guitar I enter a whole new world.

One of the funny things that is starting to happen is that I am becoming such good friends with my cousin that I am now helping him to write things, and he is starting to give me advice on how to write songs that he hopes to later put to music. But there are so many more things you can do. With the pandemic and all, I went and bought myself an expensive model of one of my favourite WWII planes, the B-25 Mitchell. I am looking forward to blocking out some time for it and watching with excitement as the plane begins to take shape.

Of course, through all this I think the best advice I have gotten when I talk about my books and my walking and other things that keep me going was from my psychiatric nurse. She simply said that my mental health is the absolute priority. I don’t even want to imagine what it would be like if I got ill again and had to go in the hospital. No one trusts you there, a lot of sick people who may even be unable to grasp ideas like covering up a cough or wearing a mask or practicing social distancing is all about. So I am doing my best to make my appointments, and to take all of my medications. I have noticed that when I get a bit out of kilter with the isolation, I tend to forget about my medications sometimes. I do get all of them in blister packs which is great because you just have to pop out the pills you need at that particular time of day and you are fine.

I am so lucky to have not only a course of medications that work well for me, but also my body has adapted to the medications so now they work really well on my symptoms but allow me to pursue certain things like my extra long walks and writing sessions. I can’t prescribe medications for people out there but I can say that if you get active in your treatment, listen carefully to your psychiatrist and ask a lot of questions, and perhaps even work through some of your issues in group or individual therapy there is a major chance you are going to make a full recovery, even go back to work. I guess though, since this is a Sunday blog that I should put out a request for a very special client of mine. She lives alone and has Tueurettes syndrome, she can’t stop swearing and doesn’t leave the house and feels very ashamed of her illnesses. She is truly a very kind lady and was nice enough to get two of my books from the library and read them.

Just to talk. little about church again, people often refer to a place of worship as a church, but really no matter how many solid bricks in the building, that isn’t a church. The people who attend the church, who participate in giving and sharing and working together and supporting each other in a Christian walk, those people are the church. I don’t want to get too far into it all, but you are welcome to post comments that I will respond to. I guess I would like to close by defining spirituality and religion, if I can get it right. Religion is for people who don’t want to go to Hell. Spirituality is for those who have been to hell and don’t want to go back. I would encourage anyone who attends a church, or even just wants to live a better, less stressful life to try to embrace the spiritual. Remember we are all immortal souls in need of love and caring, young and old. Avoid judging people, and if you see them hurting, why not help and maybe even tell them about how attending a church, reading the word of God (the bible) and learning to pray can transform just about anyone. Good night dear readers, more to come soon!